Analysis by our snooker stats department now reveals the group percentage completion rates for each group:-

Group C.     40%.   Paul beat Dexter, Lawrence beat Dexter, Jeff beat Paul.  And in a dramatic tussle on Wednesday evening, Dexter played Jeff, who has won the title no less than four times.  Dexter himself is a three times BCYC Champion – I well remember him beating me in the 2004 final

The match was evenly contested in the early stages, and Jeff quietly eroded the handicap, but in the latter stages a dramatic change occurred.  Suddenly Dexter was transformed in stature and confidence.  He potted a red, followed by the blue, another red, the black, and another red.  A 15 point break !!  Jeff was on the ropes, but recovered and when he potted the final blue it put him favourite with one point ahead and just pink and black left.  Dexter drew himself up to his full height.  The pink was a difficult long pot into the yellow pocket.  It didn’t touch the sides.  Roars of hysterical applause, from the crowd!!  Black ball game! Then a hush, as he approached the black.  A difficult angled shot from distance.  Without hesitation he confidently put it into the heart of the pocket. The handicap Committee was appalled!  How can a player on a handicap of 20 play like that?  Maybe, as they say, form is temporary, class is permanent.  Shades of 2004, I thought.

This group is moving. Everyone except John (Morse) has played at least once, and more matches are slated.

Group D.  16% (one match out of 6). Greg beat Mark.  This Group also contains previous Champions, namely Peter Harrison, who has arranged to play in the coming week, and the current Champion, David Thomas.

DEADLINES.  No deadline has yet been imposed for completion of the Group stages, but this is under active consideration.  Please play, if you wish to participate.  Greg has phone numbers, email addresses are in this email.  Play at any time, please arrange with Greg.  Tournament matches take precedence over any other use of the table.

Autumnal shades colour the woods!  It is now mid- October.  The Tournament has been in existence for 7 weeks.  Two matches have been played.  In Group C, Jeff beat Paul, Lawrence beat Dexter, as previously advertised.  Group C is the Group of Death.  How ironic that the Group of Death should be the only one showing any sign of life !!

Soon it will be time to impose deadlines for completion of the Group matches.  November, month of fireworks and Beaujolais, will soon be with us.  The shops are already ringing to the sounds of herald Angels.  Santa is servicing the sleigh and the reindeer are undergoing fitness training.

The Snooker Christmas Dinner will arrive shortly and the Trophy will be presented to the new Champion.  At present the only contenders are Jeff and myself.  That seems silly.  Will someone, anyone, please play a match???

Today the first match of the 2018 Tournament was played.  Jeff Evans, one of the stars of the show and a former multiple Champion, played Paul Nicholson, a former losing finalist, before an enthusiastic crowd (Alyson and Greg).  Paul began well and was able to add to his considerable handicap advantage to go well ahead.

Jeff pegged him back, and the contest became much closer, but Paul remained ahead with the last three colours on the table.  He potted a difficult blue but also lost his white.  Jeff cleared up to win.  As he often does !  So Group C is up and running.

The Tournament Handicaps have been freshly minted and have survived the customary rigorous, double-blind, randomised in- bottle fermented procedure.  They are set out on the Billiard Room notice-board.  In due course, which may be a little while yet, I will also print out and exhibit the matches, but all members of each group will play all other members of the same group.

Winner of Group A plays runner- up Group B, winner Group B plays runner- up Group A. Likewise Groups C and D.  I will place a diagram on the notice-board.  After Group stage all matches are knockout. All matches one frame, final best of three frames. Matches take precedence over any other use of the table and may be played at any time by arrangement with Greg and Tina.

The Champion will be presented with the BCYC Snooker Trophy by the Commodore (unless he wins it !!) at the Christmas Snooker Dinner at the Club on Wednesday 19th December 2018.

The Group Draw for this year’s Tournament will be held on Wednesday 29th August, in the Bar at the Club at 7.15 pm.

If you took part last year you should have received an email from Lawrence, maestro of the handicap.  If you are unable to play this year, please let Lawrence know ASAP.  If there are others who may wish to play please let Lawrence have your name and email address.

Updated handicaps will be published at the Draw, and the Tournament begins 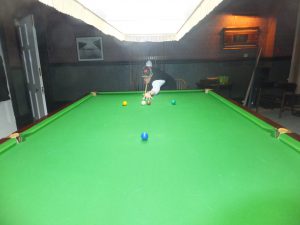 immediately thereafter.  As indicated last year, it is proposed to set deadlines for the completion of matches in an attempt to avoid compression of fixtures in the week before the Dinner which is to be held on Wednesday 19th December.